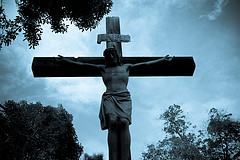 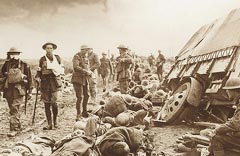 “ Still falls the rain.” such is the title of a notable poem by Edith Sitwell, which has for sub-title: ” The Raids 1940 Night and Dawn”: so we are back in the dark days of the second World War, in bomb-scarred London. To this poet the rain is symbolic of the martyrdom of Man, of the blood flowing from Jesus upon the cross, whose compassion and love still flow to redeem the world. She quotes Marlowe’s Doctor Faustus, who in his agony of damnation cries:

“O, I’ll leap up to my God! – Who pulls me down? –
See, see where Christ’s blood streams in the firmament!”

but in Edith Sitwell’s poem it is the whole world of man that year by year still nails Christ to his cross, still sinks to cruelty and war, like Judas betraying the ideals of human charity and compassion:
This poem is still within the copyright period.

Link to “Still falls the Rain”

Next: A Sight in Camp  Walt Whitman