The Manor Farm     Edward Thomas
Love of England, common to so many English poets, leads us finally this month to “The Manor Farm” by Edward Thomas:
The rock-like mud unfroze a little and rills
Ran and sparkled down each side of the road
Under the catkins wagging on the hedge.
But earth would have her sleep out, spite of the sun;
Nor did I value that thin gilding beam
More than a pretty February thing
Till I came down to the old Manor Farm,
And church and yew-tree opposite, in age
Its equals and in size. The church and yew
And farmhouse slept in a Sunday silentness.
The air raised not a straw. The steep farm roof
With tiles duskily glowing, entertained
The mid-day sun; and up and down the roof
White pigeons nestled. There was no sound but one.
Three cart-horses were looking over a gate
Drowsily through their forelocks, swishing their tails
Against a fly, a solitary fly.
The Winter’s cheek flushed as if he had drained
Spring, Summer, and Autumn at a draught
And smiled quietly. But ’twas not Winter –
Rather a season of bliss unchangeable
Awakened from farm and church where it had lain
Safe under tile and thatch for ages since
This England, Old already, was called Merry. 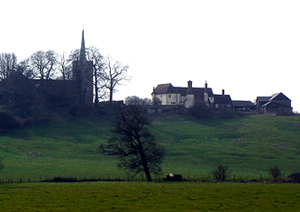