As February was formerly reckoned to be the last month of the year, so March was the first, dedicated to Mars, the god of War, resuming control after the compulsory truce of Winter, but also to the peaceful occupation of seed-sowing.
Here is the leader of Spenser’s Pageant:
First sturdy March, with brows full sternly bent
And armed strongly, rode upon a Ram,
The same which over Hellespontus swam;
Yet in his hand a spade he also hent,
And in a bag all sorts of seeds ysame,
Which on the earth he strowèd as he went,
And filled her womb with fruitful hope of nourishment. 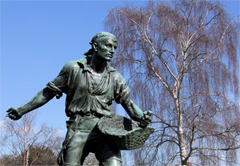 Just as February was drawn by the fishy constellation, so March is drawn by Aries the Ram, here identified with the unlucky bearer of the golden fleece, who was sacrificed by Phryxus, after transporting him and his sister, Helle ,across the Hellespont, his golden fleece later to become the hard-won prize of Jason and the Argonauts. In his agricultural aspect March grasped (‘hent’) a spade, and carried a bag of mixed seeds, ‘ysame’ meaning ‘together’.