THE RIME OF THE ANCIENT MARINER

Frost’s “bright green snake” takes us back to Coleridge’s “The Rime of the Ancient Mariner”
with its water-snakes “blue, glossy green, and velvet black”. This ancient mariner, or old navigator,
as he was originally called, had incurred the deadly hostility of the spirits of Nature by his wanton
killing of a harmless albatross. At first the voyage continued to prosper, but, after crossing the line,
the ship was suddenly becalmed:

The fair breeze blew, the white foam flew,
The furrow followed free;
We were the first that ever burst
Into that silent sea.

Down dropt the breeze, the sails dropt down,
‘Twas sad as sad could be;
And we did speak only to break
The silence of the sea!

All in a hot and copper sky,
The bloody Sun, at noon,
Right up above the mast did stand,
No bigger than the Moon.

The very deep did rot: O Christ!
That ever this should be!
Yea, slimy things did crawl with legs
Upon the slimy sea.

About, about, in reel and rout
The death-fires danced at night;
The water, like a witch’s oils,
Burnt green, and blue and white.

And some in dreams assur’ed were
Of the Spirit that plagued us so;
Nine fathom deep he had followed us
From the land of mist and snow.

And every tongue, through utter drought,
Was withered at the root;
We could not speak, no more than if
We had been choked with soot.

Ah! well a-day! what evil looks
Had I from old and young!
Instead of the cross, the Albatross
About my neck was hung.

It was not until, after many supernatural horrors, the Ancient Mariner blessed the water snakes for their beauty,
that he was reconciled to Nature and thus freed from his burden of guilt:

Beyond the shadow of the ship,
I watched the water-snakes:
They moved in tracks of shining white
And when they reared, the elfish light
Fell off in hoary flakes.

Within the shadow of the ship
I watched their rich attire:
Blue, glossy green, and velvet black,
Then coiled and swam; and every track
Was a flash of golden fire.

The self-same moment I could pray;
And from my neck so free
The Albatross fell off, and sank
Like lead into the sea. 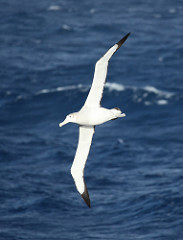