Another animal slaking its summer thirst was thus briefly described by James Thompson in his “The Seasons” of 1727; in these lines from:SUMMEROft in this season too the horse, provok’d,
While his big sinews, full of spirits, swell,
Trembling with vigour, in the heat of blood,
Springs the high fence; and, o’er the field effus’d,
Darts on the gloomy flood, with steady eye,
And heart estranged to fear: his nervous chest,
Luxuriant, and erect, the seat of strength!
Bears down th’opposing stream: quenchless his thirst,
He takes the river at redoubled draughts;
And with wide nostrils, snorting, skims the wave.

The phrase “his nervous chest” sounds inappropriate, until we remember that most 18th century poets were classical scholars, and that Thompson will have been thinking of the Latin word “nervosus” meaning “muscular” : his muscular chest, luxuriating in the water, upright against the stream, the strongest part of his body, surmounts the opposing current. Similarly, when he tells us that the horse was effus’d o’er the field, it means literally “poured out”, and expresses the freedom that the horse feels after surmounting the high fence. 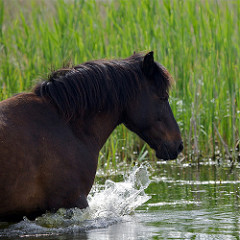 Next: The Zebras Roy Campbell