Lord Macaulay’s flair for rendering the patriotic spirit produced a description of ‘Fire over England’ in his poem ‘ The Armada’, for which he uses the old ballad metre of ‘Chevy Chase’. He thus describes the signal beacons that, by night, mustered the English defence:

From Eddystone to Berwick bounds, from Lynn to Milford bay,
That time of slumber was as bright, as busy as the day;
For swift to East and swift to West the ghastly war-flame spread.
High on St Michael’s Mount it shone, it shone on Beachy Head.
Far oe’r the deep, the Spaniard saw along each southern shire,
Cape beyond cape, in endless range, those twinkling points of fire
The fisher left his skiff to rock on Tamar’s glittering waves,
The rugged miners poured to war from Mendip’s sunless caves:
Oe’r Long1eat’s towers, oe’r Cranbourne’s oaks, the fiery herald flew –
He roused the shepherds of Stonehenge – the rangers of Beaulieu.
Right sharp and quick the bells all night rang out from Bristol town,
And ere the day three hundred horse had met on Clifton Down.
The sentinel on Whitehall gate looked forth into the night,
And saw oe’r hanging Richmond Hill that streak of blood-red light.
Then bugle’s note and canon’s roar the death-like silence broke
And with one start, and with one cry, the royal city woke;
At once, on all her stately gates, arose the answering fires;
At once the wild alarum clashed from all her reeling spires;
From all the batteries of the Tower pealed loud the voice of fear,
And all the thousand masts of Thames sent back a louder cheer:
And from the furthest wards was heard the rush of hurrying feet
And the broad streams of pikes and flags dashed down each roaring street:
And broader still became the blaze, and louder still the din,
As fast from every village round the horse came spurring in. 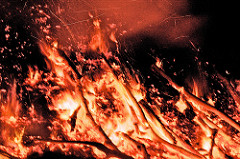