Bees have fascinated poets from Vergil onwards, and Shakespeare’s lines in ‘King Henry the Fifth’ come to mind. The Archbishop of Canterbury illustrates the principle of the division of labour from a hive, incidentally mistaking the queen-bee for a king:

For so work the honey-bees,
Creatures that by a rule in nature teach
The act of order to a peopled kingdom.
They have a king and officers of sorts;
Where some, like magistrates, correct at home,
Others, like merchants, venture trade abroad,
Others, like soldiers, armed in their stings,
Make boot upon the summer’s velvet buds,
Which pillage they with merry march bring home
To the tent-royal of their emperor;
Who, busied in his majesty, surveys
The singing masons building roofs of gold,
The civil citizens kneading up the honey,
The poor mechanic porters crowding in
Their heavy burdens at his narrow gate,
The sad-eyed justice, with his surly hum,
Delivering oe’r to executors pale
The lazy yawning drone. 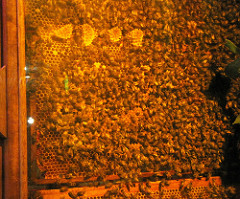 Next Poem:  The Lake Isle of Innesfree by W B Yeats